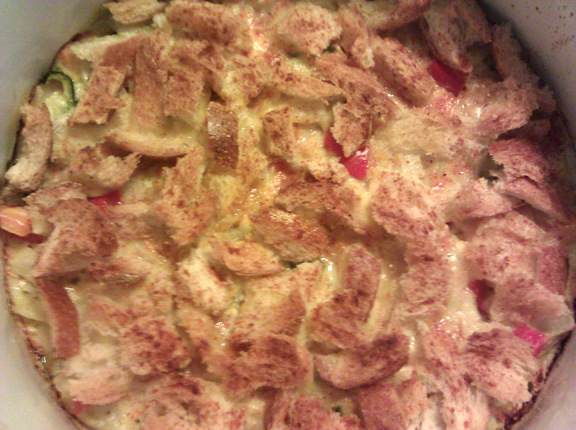 So, if you read my CSA post from last week, you’ll remember I had squash in the box (sounds like a band name), and last night I squashed it into a casserole.

Squashed squash with onions and peppers.

When I was little I was like a lot of kids…I wouldn’t eat squash. It smelled bad, it looked funny and yuck! It was a VEGETABLE! My mom kept working on me though, and eventually came up with a recipe for a squash casserole featuring lots of cheese, and I started thinking: “hey, this squash stuff isn’t too bad.”

Nowadays it’s one of my favorite vegetables, and I so look forward to the fresh squashes that come with summer because they can and do provide some mighty fine eating. In addition to the ubiquitous yellow squashes and zucchini, some of the great heirloom varieties of summer squashes like Pattypan are now readily available, too.

Casserole dotted with butter and ready for the oven.

So here’s what was for supper on our table last night and I’m including my own squash casserole recipe. This isn’t the traditional southern version with sour cream and Ritz crackers (not that that isn’t good!), but it’s a little more cleaned up version with some other veg added in for good measure…and lots of cheese, of course.

And oh yes, here’s the peach and blueberry crisp for dessert, too. I added some raspberries I had on hand to this batch because I didn’t have enough peaches…yum.

Ah, summer. I’m so happy you are here!