LOTS has been written about the Brick Store Pub here in Decatur, GA. The owners—Dave Blanchard, Mike Gallagher and Tom Moore—get much due praise and press for their accomplishments with “The Brick,” as it is fondly known, and for Leon’s Full Service. They certainly deserve credit for bringing Belgian beer and Belgian style beers and ales to the palettes of Decaturites—as well as bringing Atlanta to Decatur to drink them—and their selection and skill in pouring draft is, in my opinion, the best in town. They have some pretty darn good eats at the Brick, too, including a recently updated menu featuring some tasty new items along with some old favorites, and I’ll talk more about that in a minute.

So back to my title, what does the Brick Store Pub mean to me? Well, first it meant a warm welcome to the Decatur area when my husband and I bought a house here as newlyweds in 1998. I’d lived in Decatur before, in the 1980’s, and to say that not much was happening then would be an understatement. But with the advent of our very own neighborhood pub in the form of the Brick, everything began to change. I remember going into the Brick for the first time—there was no Belgian Bar then, just a huge room downstairs with an enormous horseshoe shaped bar, and a smallish upstairs eating area. It wasn’t crowded either, just some neighborhood folks enjoying a great new place to drink and eat, meet and greet. At any given moment, you’d find yourself chatting with one of the bartenders pouring beer, or run into one of the owners, and a lively conversation would ensue about the virtues of food and drink, and beer in particular. 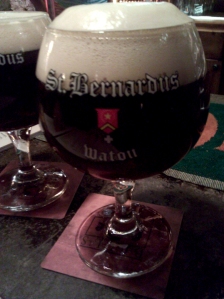 Once the law against serving high-gravity beer was lifted, the owners opened up their space and created the infamous Belgian Bar, filled to the brim with diverse Belgian beers in bottles and on draft. This event marked the beginning of my education and appreciation of beer. In fact, I’ll confess that I was a wine drinker and could take or leave beer up to that point…I just didn’t get the attraction. It always seemed weak if it wasn’t bitter, or bland by comparison to wine. Then suddenly with the entree of the Belgians and the wonderful new world of micro-breweries, my feelings about beer changed drastically. The first time I tasted a Belgian high-gravity beer at the Brick, I finally understood what all the fuss was about. It was a St. Bernardus Apt. 12, recommended by the staff, and I was completely hooked. There were, and are still, some truly knowledgeable and fabulous folks there pouring the beer…Miles (the now famous bartender of Leon’s), Brian, Matt, Arch, and Steve were some of the first staff we met at the Brick. Then Steve moved out west and along came Courtney, Erin, and so many more. Even in the midst of the most crowded weekend service, they always manage to serve you beer in a timely fashion, make you feel at home and treat you like you’re a good friend. You just gotta love that.

13 years have passed now, and during that time the Brick Store and Decatur have grown up together and became a “destination.” We find ourselves in there on average every couple of weeks, and we’re still always warmly greeted by staff at the door and at the bar. This was the case when we stopped by the other night to have some beers and try out a few more of the new menu items, which are geared around local and seasonal foods.

The Country Chicken Pate...you can tell we hated it!

To start, we both ordered the smooth as silk, full of dark fruit and very rich in taste, St. Bernardus Apt. 12 on draft (surprise!). No matter how many times I have this beer, I never get tired of it. It’s a staff favorite, and I’m always amazed by what a grand and truly drinkable beer it is any time of the year, and how good it pairs with food. And about the food…we decided to order the Country Chicken Pate for a starter and it didn’t disappoint. This comes as a generous jar of a smooth and airy chicken pate, which texturally reminds me more of a mousse. In a word: Delectable. Smooth to the point of creamy…the savory chicken is combined with a lightly herbaceous dill and some bacon-y goodness, then topped with smoky-sweet peach preserves and served on house made and slightly salted crackers…it’s perfectly balanced. One of the best food items I’ve had at the Brick and delicious with beer.

The Turkey Cobb gets "Best of Turkey Sandwich" award.

We also each ordered one of the new sandwich features—mine was the Turkey Cobb and Dave ordered the Muffaletta. Both were really yummy, with the Turkey Cobb surprisingly edging out the Muffaletta in the “best” category. I wasn’t so sure about how special a Turkey Cobb sandwich could possibly be, but we agreed that this one really was the best turkey sandwich we’d ever tasted. It’s served on Holeman and Finch ciabatta, which gives it a good head start. The oven-roasted turkey, local Avondale Estates Pine Street bacon, hard-boiled egg, danish blue cheese, bibb lettuce, tomato and avocado meld together to be so much greater than the sum of their parts, and form a taste sensation that just explodes in your mouth. It seems impossible to describe a turkey sandwich thus, but there it is. I had a side of their lovely arugula salad with a light and lemony dressing, goat cheese, dried cherries and spiced pecans—an old favorite and a good one. The Muffaletta was very delicious, too, it just happened to be slightly outclassed by the turkey in this instance. We’ve also tried the homey and tasty cast iron pot pie off the new menu, but I have to say I did like it better when it was a special and had more of a variety of veggies in it along with a side of arugula. Our neighboring table ordered the Sausage and Grits—a grit cake topped with andouille sausage and a tomato jam which looked so beautiful and I’m told is super, and I’ll be trying that next—and the Cornish Game Hen, too. My other favorites from the old menu are the Pimento Cheese as an appetizer or on a burger, Fish and Chips, Chicken Salad Melt, the burgers in all forms and the Barvarian Pretzels.

I finished off the night with a draft Allagash Fluxus, and had to stop there because it was a “school night.” And, I’ll stop here because this is becoming an essay, and will leave you with these thoughts. The Brick Store Pub and all of the people who make it such a great place, have a big thumbs up from me. It’s still my “go to” spot, and has become an integral part of the fabric of the Decatur area and it’s inhabitants. To have a small part in contributing to their success has been a great pleasure. And I know I’m not the only one who feels this way. If you live in the area, or are just visiting, or have been living under a rock and just haven’t heard of the Brick, you owe it to yourself to check it out! We may just see you there, and I predict you’ll become a big fan, or a friend, too.

8 thoughts on “BSP, What You Mean to Me”