My family loves history and architecture, touring historic sites and taking impromptu road trips. And as a result of this, we are constantly seeking little hidden places to go and gems to find. I’ve posted about some of those little gems from time to time and a lot of them are around my hometown of Florence, Alabama. Every time I go and visit, it seems like we discover more interesting little tidbits about the area.

We were in Florence visiting my mom a couple of weeks ago, and had heard that an old home…a plantation, actually…had been restored and reopened recently, so of course we had to go and check out this latest “find.” I’m offering to take you along on this little road trip of ours, if you’re interested, and inviting you to step back in time with us and take a peek into a slice of southern American history, and the history of North Alabama, in particular.

View of walkway and entrance to the grounds of Pond Spring Plantation, the home of General Joseph Wheeler and his family.

Pond Spring Plantation was the home of General Joseph Wheeler, former Major General of Cavalry of the Confederate western army, The Army of Tennessee. Many local sites have been named after General Wheeler, including the nearby Wheeler Dam on the Tennessee River. After the Civil War, Wheeler fought again as a Major General in the Spanish-American War and the Philippine-American War, earning the well deserved nickname “Fightin’ Joe” Wheeler. After the Civil War, Wheeler became a long time and noteworthy U.S. congressman, and was known as a national symbol for reunification and reconciliation in the late 19th Century. And as a U.S. congressman in the early part of the 20th Century, he was a driving force for progressive economic direction and growth in North Alabama. Quite a remarkable and accomplished man. 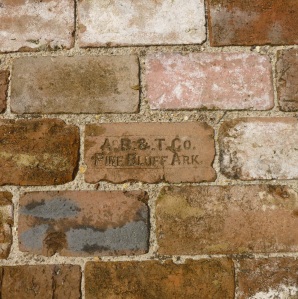 Wheeler and his wife Daniella Jones Sherrod came to live at Pond Spring, which was her family home, 4 years after they were married. The “home” is actually a complex of 3 homes spanning the three families who have owned this land. One of the most interesting aspects of Pond Spring Plantation is that almost all of its original buildings and outbuildings are still standing, which is quite rare. The 50-acre site includes a double log cabin with a dogtrot built around 1818, a circa 1830 Federal-style house (the Sherrod home which became the wing to the Wheeler house), the Wheeler home, eight farm-related outbuildings, family cemeteries, an African-American cemetery, a small Indian mound, a pond, and extensive garden areas. The Wheeler home itself has been made into a historic house museum, which contains the General and his family’s memorabilia, furnishings and clothing—all items original to the house and spanning a time period from 1868 through 1955 when “Miss Annie,” the last of the Joe Wheeler family, died.

Plaque underneath the Alabama historic marker on the front porch of the main home.

The carefully and lovingly restored home and surrounding property had been closed for a decade and just reopened to the public as a museum on Memorial Day of this year. Funds are still being raised by the Foundation to continue to restore all of the buildings on the property before they collapse beyond repair, and the stables are chief amongst those in need of help soon. At the time of this writing, you can tour the main museum, the double log cabin, the old office building and the family cemetery, as well as walk around the wing which is in progress of being restored, the main barn, the ice house and the store barn with its interesting metal shingle roof still intact. It’s my hope that funds will be secured in the near future to enable restoration of the gardens and clear some of the scrub in the area so that you can see the pond, the African-American cemetery and the Indian mound, as well as continued restoration of the rest of the buildings. What a complete historic picture that would make!

If you live in the area, or are just passing through, I’d highly recommend the very informative and inexpensive guided tour of the home. And if you’re interested in historic preservation and want to become part of preserving an important piece of it, you can visit The Friends of the General Joe Wheeler Home Foundation website by clicking here to see how you can help.

And now for my tour, and I warn you, there are a lot of images! I’ll do my best to give you an idea of the grounds and all the buildings that can be accessed at this point, so please join me as we walk around the property for a few minutes. No photography is allowed inside the main buildings, as is so often required in order to preserve historic furnishings and memorabilia, but you can see more of the interior, along with some archival photos, at the Wheeler web site link in the above paragraph. And keep on scrolling, this post continues at the bottom! 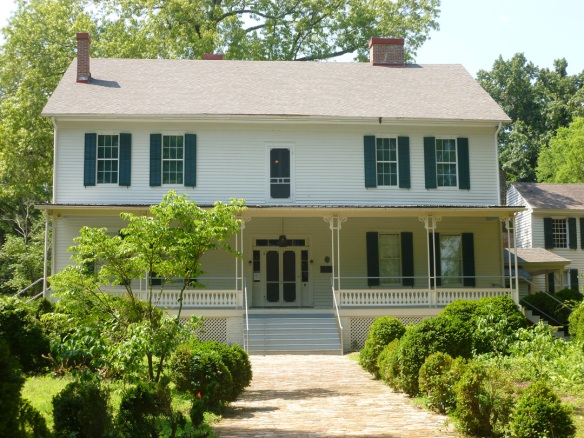 View of the Wheeler museum main home of Pond Spring Plantation, with another 1830 Federal home wing attached. Old overgrown boxwood gardens surround the complex, and all outbuildings and the original double log cabin are to the sides and back of this house.

This house was originally a freestanding home before the Wheeler’s built their main home, attaching this one to use as a wing.

All porches have painted blue ceilings to help keep them cool.

The water pump in front of the main home. 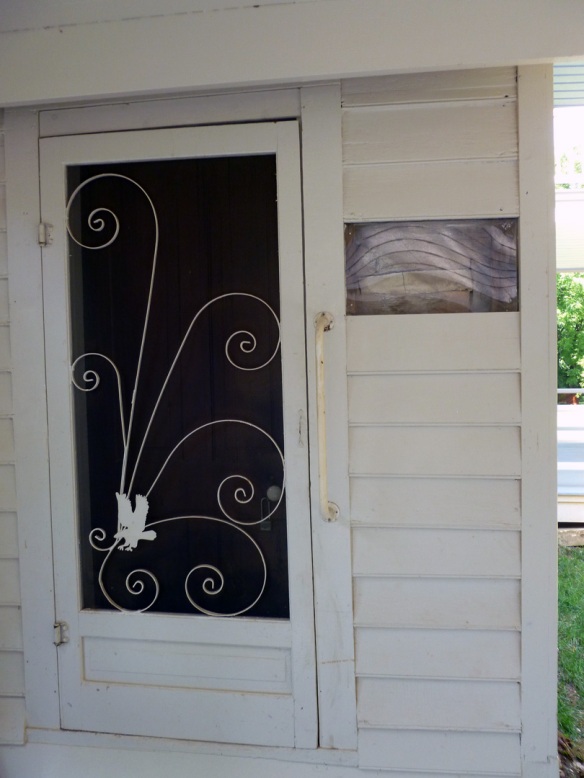 A side screen door on the wing house which is currently being renovated to open to the public. The “window to the past” at the right of the door shows the original log construction of the home. Some plasters used on the property contain animal hair to help bond and cement the timbers.

This view from the upper porch on the back of the main house is of the Ice House and the gardens next to it. The stables, which are in dire need of restoration are to the right. 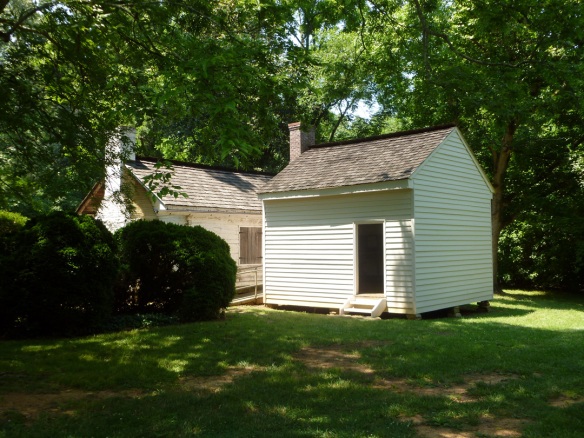 Behind the main house and wing, the building to the right was at one time the office of the plantation. Behind it is the original family home on the property, a double log cabin.

Of particular interest to me was the double log cabin, which has two spacious rooms with fireplaces, connected by a dogtrot in the middle. This was the original home that the first owners lived in. It had various uses and tenants over time. 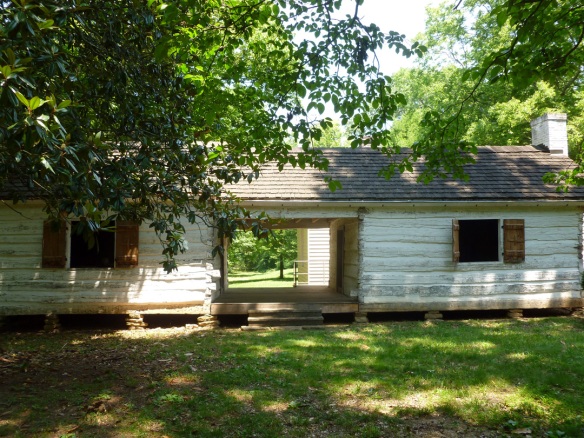 A better view of the dogtrot bisecting the cabin. Dogtrots were breezeways built into homes to cool them before the time of air conditioning or even ceiling fans, and were so named because the area was so wide that the dogs trotted through them. 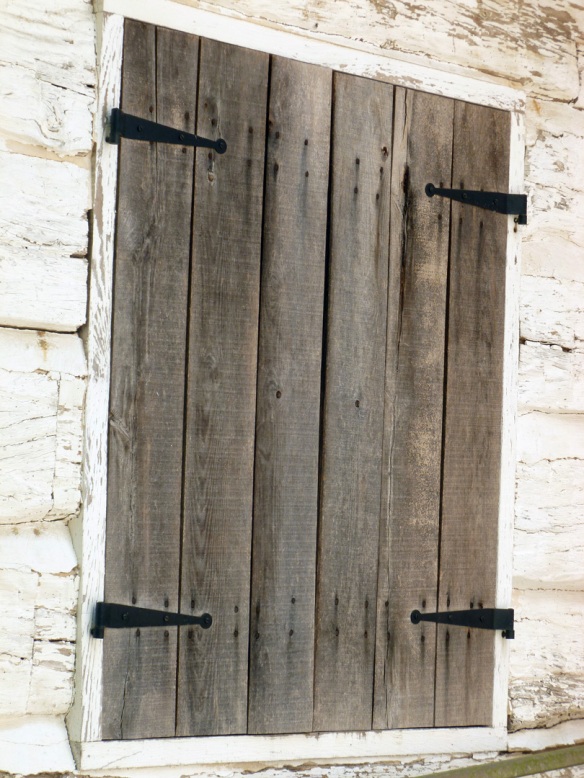 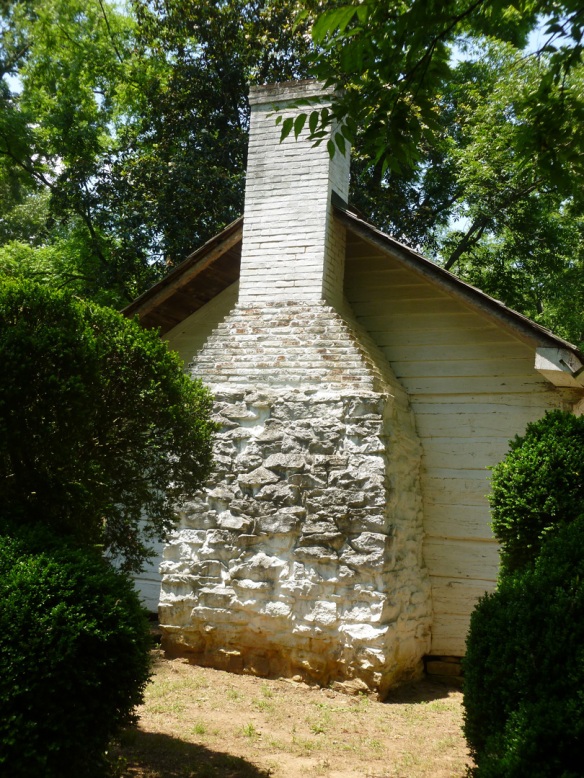 View of one of the two chimneys on each end of the double log cabin.

The Wheeler family monument in the Wheeler section of the cemetery.

The interesting back of the headstone of General Wheeler’s son Thomas, who drowned saving a comrade at sea. 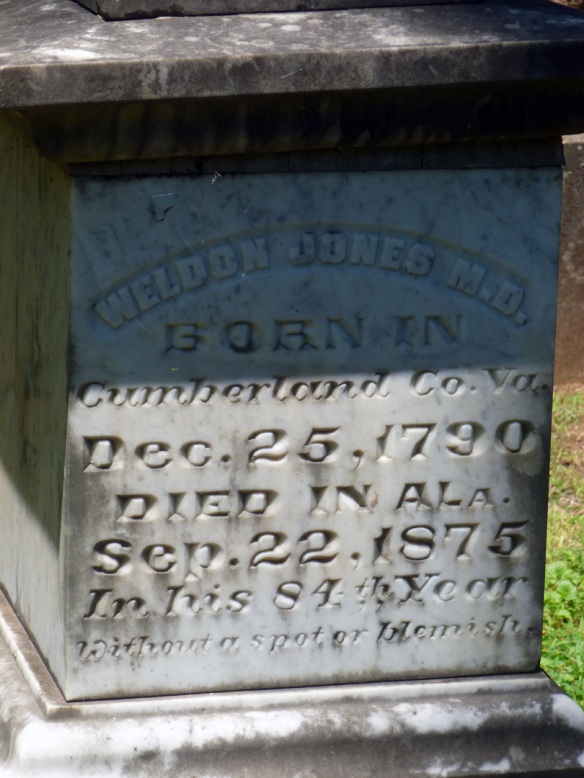 The inscription on a monument from a family in the cemetery reads that this one died at age 84 “without a spot or blemish.”

View of the boxwood Allee that leads from the home and outbuilding areas to the cemetery.

Behind the main home and wing is the store barn ( a storage area) with its original metal shingled roof. You can see the main barn off to the right. 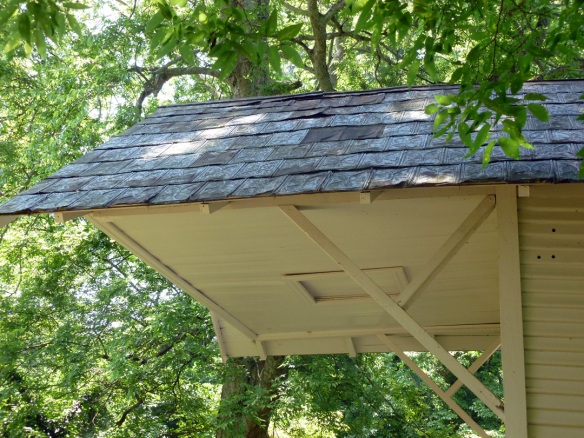 Here you can see some detail of the original metal shingles that were on the main houses as well, but now only this one metal roof remains intact. 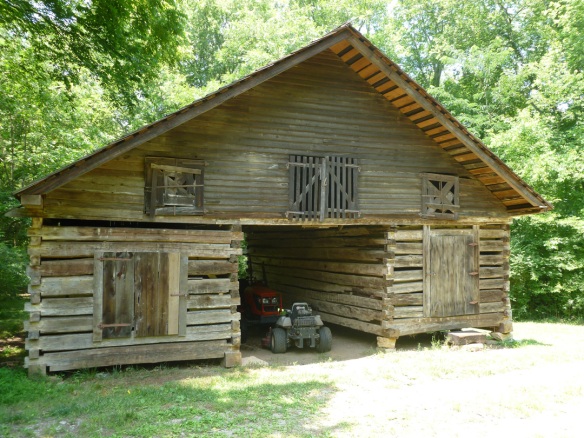 The main barn sits to the side of the the main home and wing.

Detail of the main barn, also an intact log structure.

View coming up the small hill from the barn back towards the wing and main home.

And we’re back at the main house. I hope you’ve enjoyed this little bit of North Alabama history and my tour of Pond Spring Plantation.

But wait, where’s the food you say? Good question. I’d hoped that we might be able to see the old kitchen, but that was in the unrestored wing off the main house. And there weren’t any exciting restaurants in the immediate vicinity that we knew about. However, in my mind, I can just see something similar to this wonderful and seasonal old fashioned blueberry pie (recipe here) that my mom made, sitting on a windowsill in the kitchen of the Wheeler home cooling, and being served at their lovely dining room table as the crowning glory of an evening meal. Enjoy. 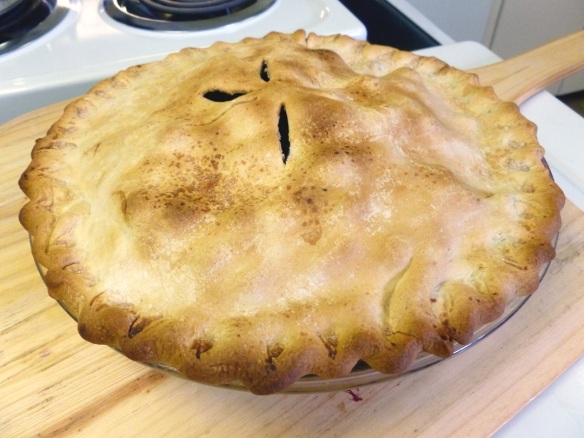 Mom’s pretty pie awaited our return from the tour of Pond Spring…yay!

I’ll have mine a la mode, please!