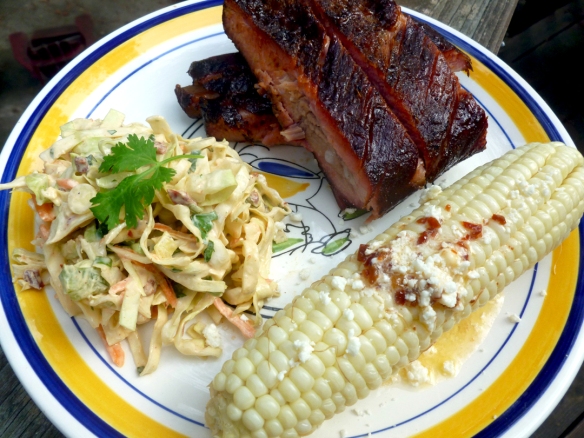 Now THIS is a southern plate of food that makes me grin like a Cheshire Cat!

It’s said that you can beat the heat by eating spicy foods on a hot day. And as we all know, folks in many parts of the world employ this method in their cooking to induce sweat, which cools the body. So seein’ as how we’ve averaged at least 100 dry degrees around here for days on end, I’ll try anything, and fighting heat with heat works for me!

Of course I just happen to really enjoy spicy foods, which is a plus. As a child and for a long time after that, I couldn’t tolerate spicy, but once I developed a tolerance there was no stopping me! Since we celebrated Independence Day here this week with fireworks and cookouts, it seemed the perfect time to invent something new to enjoy the festivities in style, and that something was my Firecracker Slaw.

Now I should start right off by saying that I’m not a big fan of traditional slaws…they are always too mayonnaise-y or vinegary for me, for the most part, and the ones I’ve liked the best featured some twist on those takes like adding apple or fennel—or they were hot slaws made to go on top of barbecue. I’ve wanted to try my hand at making slaw with chipotles in it for a while now, and conveniently last week, our CSA box had a beautiful head of cabbage in it. I already had some carrots, green pepper and onions…and the chipotles, of course, so I started slicing and experimenting.

To be honest, this is probably only the 3rd time I’ve ever made a slaw, so I wasn’t really sure if I’d end up wasting a lot of nice ingredients. But in actuality, the opposite was true. This is killer slaw.

We loved it. It was even better the next day, and we took it to a cookout on the Fourth, and everyone loved it! However, I’m not sure kids would love it, but depends on the kid and how spicy they like their food. We had our slaw the first night with some corn on the cob slathered in my chipotle butter, and some mighty fine ribs from our local favorite ‘cue place Community BBQ—and if you haven’t tried their pulled pork, you haven’t lived! The best.

On the Fourth, we used it to top grilled bratwurst…OMG. This slaw makes a bratwurst transcend the bounds of mere sausage and enter the stratosphere. I mean, even if you don’t like slaw or brats, you’ll love these two together…and I speak from firsthand experience of not being so fond of either for a very long time. You gotta try this slaw…you’ll like it, I promise! Must. Make. More.

Here’s my recipe so you can try out making some fireworks for yourself this weekend. And do have a happy one, will ya?

You’ll find my Firecracker Slaw at the intersection of corn and ribs!

1/4 cup mayonnaise (I use light canola mayo)
3/4 cup sour cream (I use light sour cream, but not non-fat)
juice of 1 lime
2 Tablespoons of orange juice (bottled from concentrate is fine)
2 chipotle peppers in adobo sauce, minced
2 teaspoons of the adobo sauce
kosher salt and freshly ground black pepper to taste

In a very large mixing bowl, combine the cabbage, green pepper, carrots, scallions and cilantro until well mixed. In a small bowl whisk together the mayonnaise, sour cream, lime juice, orange juice, chipotle peppers and adobo sauce until smooth and well blended. Pour the dressing over the vegetables, and stir to coat evenly. Season with salt and freshly ground black pepper to taste. Store in the fridge, and allow the flavors to blend for at least an hour before serving.

Cotija cheese, or feta, to sprinkle over the top (optional, but fantastic)

In a small bowl combine all the ingredients, stirring with a spoon and mashing the chipotle into the butter until well combined. Slather the butter over the hot corn, top with a good sprinkle of the Cotija cheese, and add some black pepper to the corn if you like….I usually like! Leftover butter will keep for some time in the fridge.