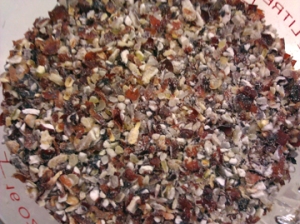 You no longer have to be born and bred in the southern U.S. to have tasted grits in one form or another. Now a part of the mainstream food vernacular, they appear on menus and in recipes from grit cakes to souffles, and the ever popular shrimp and grits. But as a child raised in Alabama, I hated them! Usually over salted, or worse still, bland and runny, I just didn’t get it. To me, they were slop.

Fast forward to adulthood and nothing had changed­­—that is, until a few years ago when I tasted a dish called “Surprise Grits,” and boy, was I! Grits cooked in milk and butter, cooled and then cut into squares, covered with melted butter and sprinkled with Parmesan and Gruyere cheeses, then baked. The result was sublime…a textural cross between a grit cake and a souffle. Suddenly, my world was open to the gritty possibilities.

Last weekend on a camping trip to north Georgia, my spouse and I happened upon a working grist mill in the vicinity of Dillard, GA called Barker’s Creek Mill. Owned by the Hambidge Center, an artists in residency program located close by, the tiny mill house is in a bucholic setting beside a clear and sparkling creek, and features a large wooden paddle wheel with a long flume attached to the side of it. Woody, who by day is a Physics professor at the local school, operates the mill on the first Saturday of each month, grinding corn and grains into lovely flours, meals and 3 kinds of grits (white, yellow and red) for sale to the public. Kind and soft-spoken, Woody stopped what he was doing to specially grind some red corn into speckled grits for me­—something I’d never tasted or even seen—and then took us on a tour to the basement to see the giant old mill stone which runs the grinding machine. The whole experience was a treat, stepping back in time to bond over the craft of making food.

At home we had another treat in the form of the Red Speckled Grits. They have a hearty and rich look, with a somewhat nutty taste and texture that’s very different from stone ground white or yellow grits. In fact, we agreed they were the best grits we’d ever tasted!

So now my conversion to a grits fan is complete, and the next time we find ourselves in north Georgia near Dillard we’ll be on the lookout for more grits, and for more trails leading us to something good.