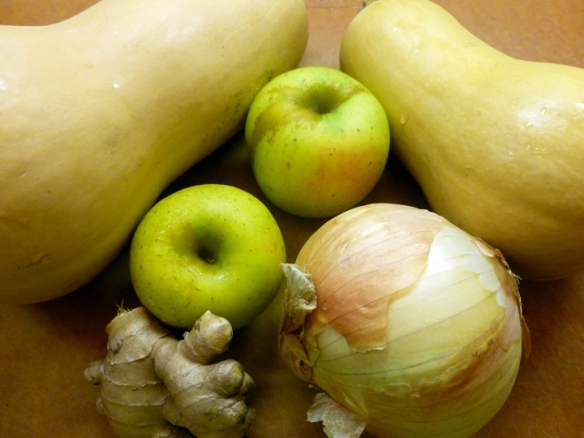 A busy Monday work day and no time to get groceries for dinner…so what is for dinner?

Gotta pull out whatever I have and make up something good, but simple. Okay, I have butternut squash, onions, apples…sounds like a seasonal soup. What’s in the pantry? One carton of chicken stock, some light coconut milk…hey, now we’re talking. What else? Some Chinese Five Spice, some cayenne…some fresh ginger. Hmmm, an Asian-Inspired Butternut Squash Soup, that’s the ticket!

Roast the veg and fruit, put it in the pot, add the liquid, ginger and spices, cook until the flavors fuse, whiz with the stick blender, and voilà! Throw together a little salad from more stuff in the fridge…arugula, some goat cheese, a pear, some walnuts and toss in a few cranberries with a balsamic vinaigrette drizzle. Dinner done, no sweat no hassle. And wow, did this make a good soup…tastes like it has curry in it, but it doesn’t. Just a beautiful, savory butternut, apple and onion flavor with a trace of coconut and and sweet hot spice.

Whew, thanks, I needed that! 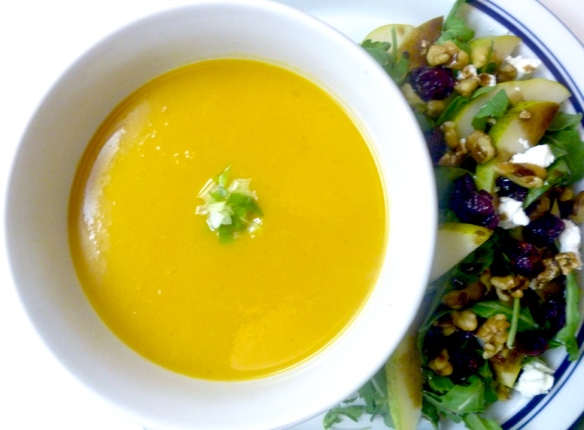 Preheat oven to 400 degrees. Cover a baking sheet with foil, then grease the foil with olive oil. Rub a tiny bit of olive oil all over the squash, apple and onion and place them cut side down on the baking sheet. Bake in the oven for 30-35 minutes or until the vegetables are tender, the skins are shriveled and pulling away from the flesh…this will take less time for the apples and the onions most likely, so check them at about 20 minutes into the cooking time and pull them out, then let the squash finish cooking.

When the vegetables and fruit are tender, remove from the oven, let them cool enough to handle, and remove the skin from the squash and apple and any charred parts of the onion if there are any, but keep the caramelized parts as it adds flavor. Put the veg and fruit and put into a soup pot and mash it up well with a potato masher. Add the chicken stock and the coconut milk, then stir in the cayenne, Chinese five spice, ginger and about 1 teaspoon of salt, and bring to a boil over medium high heat. Reduce the heat to simmer and allow the soup to cook for about 10 minutes, stirring every once in a while. After 10 minutes are up, remove the soup from the stove and puree with a stick blender, or in batches in a regular blender, until the soup is a smooth consistency. Return the soup in the pot to the stove and heat through unti it just begins to simmer again, taste for seasoning and add salt if needed. Remove from the heat and serve. A few chopped scallions on top is festive and tasty!